Whenever a developer resurrects a decades-old game, the same question arises along with it: does the remaster maintain the integrity of the original.. 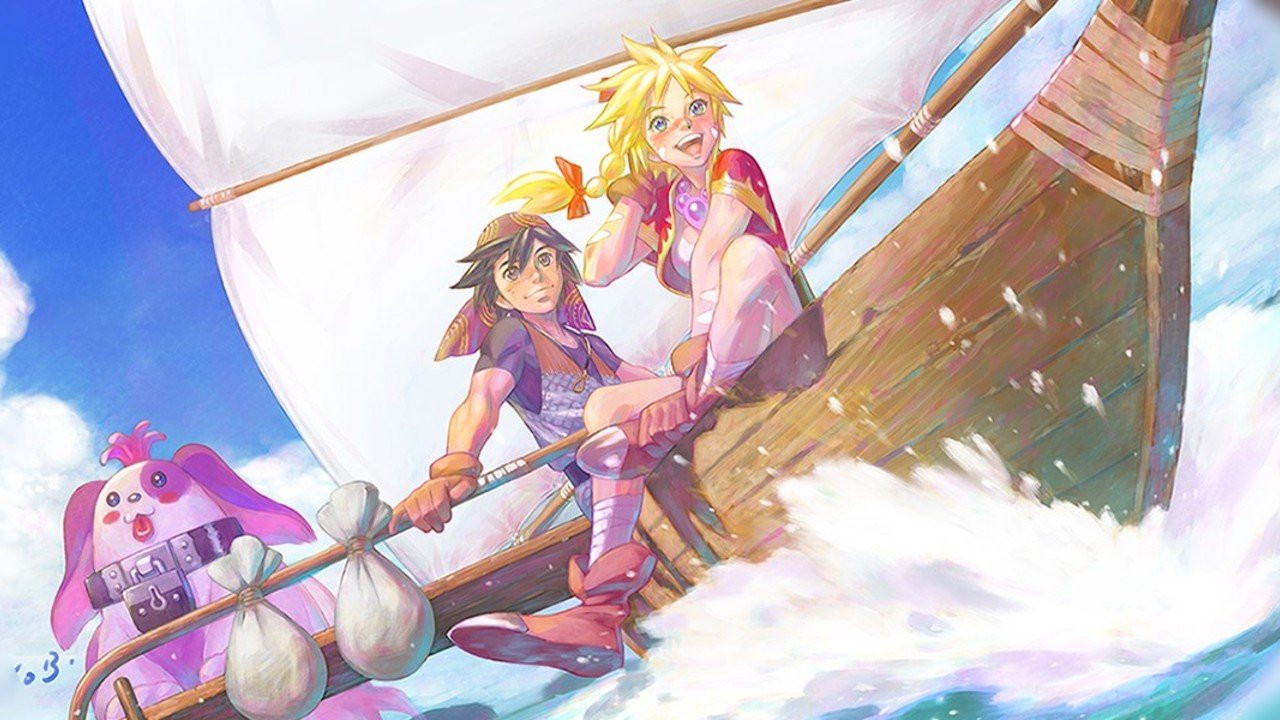 Whenever a developer resurrects a decades-old game, the same question arises along with it: does the remaster maintain the integrity of the original while changing enough to warrant a purchase for both newcomers and longtime fans alike? For Chrono Cross: The Radical Dreamers Edition, that’s tough to answer. A sequel to Chrono Trigger, Chrono Cross’s first re-release in two decades isn’t feature-filled or resplendent with next-gen graphics to make the game more palatable for a modern audience. No, it’s a remaster in the basest sense of the term: a lick of paint and a handful of bells and whistles for good measure.

The Radical Dreamers Edition does however come paired with another game: the elusive visual-novel – titled Radical Dreamers – originally released in 1996 for the Satellaview, a peripheral attachment for the Super Famicom in Japan. Until now there was no way to play Radical Dreamers in the West outside of a fan-translated ROM hack. For fans of the Chrono series, this is more than just a bonus tacked onto a remaster of a beloved game. It’s half the reason to buy the package. 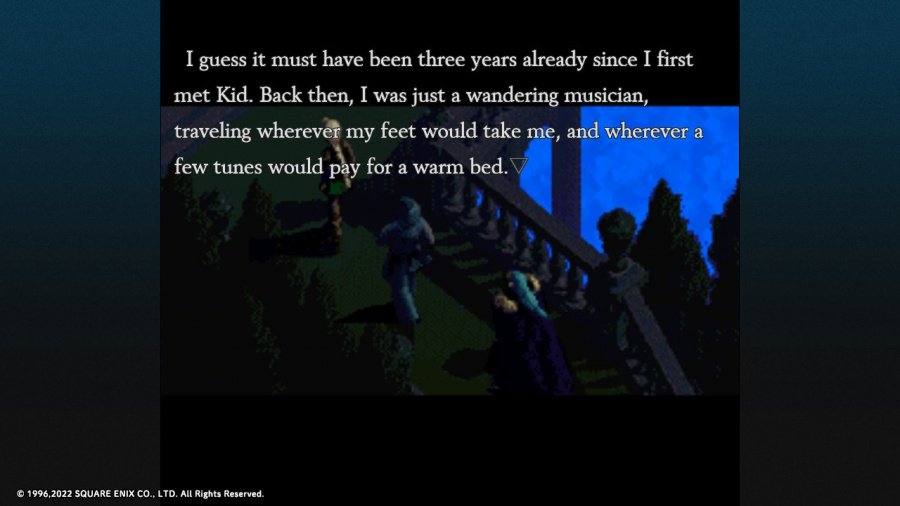 Intrigued by this unearthed relic, we jumped into Radical Dreamers first. We noticed immediately that other than adding a clearer font, little else has been done to the game visually. That did not stop the text-based adventure from engrossing us, however. Series composer Yasunori Mitsuda’s soundtrack pulls more than its share of weight. There isn’t a lot of music to accompany the short narrative, but what music there is tugs on the ol’ nostalgic heartstrings as it resembles both Trigger and Cross’s soundtracks. So too does the return of familiar characters, as the events of Radical Dreamers exist as an alternate timeline to Chrono Cross and laid the foundation for its plot.

Radical Dreamers takes place in Lynx’s Manor, with the protagonists Serge, Kid, and Magil infiltrating it to steal the Frozen Flame. What the Frozen Flame is comes to light as the player, taking on the role of Serge, selects text-based choices to navigate the manor, find items, and circle back to unlock other areas. Events play out quite differently based on the choices you make; Kid might admonish Serge rather than praise him, while a battle with a skeleton may dramatically change in a subsequent playthrough.

Going in, we didn’t expect a visual novel from 1996 to hold up too well, and unfortunately it doesn’t — Radical Dreamers just isn’t that fun. But Chrono fans with interest in its esoteric lore will enjoy the hour-and-a-half it takes to unravel its mysteries. For those who really like selecting ‘continue down the corridor’ again and again, there are six alternate endings and scenarios to unlock – a couple of which resemble absurd fever dreams – to eke out a half-dozen more hours.

Chrono Cross itself, however, is a delight, will always be a delight, and we’ll fight anyone who says otherwise. Serge and Kid’s dimension-hopping adventure remains unchanged at its core; there are no extra boss battles or reworked story beats here. Within a few hours, you’ll be collecting dozens of party members like Pokémon – including a skeletal clown, a mushroom man, and a luchador – on a jaunt across two versions of the lush archipelago of El Nido to learn the truth behind the Frozen Flame, all the while battling a myriad of polygonal enemies in a turn-based system. To this day, few adventures match the level of whimsy and mystique of Chrono Cross; all corners of El Nido are filled with morsels of lore, dramatic scenarios, and colourful characters. 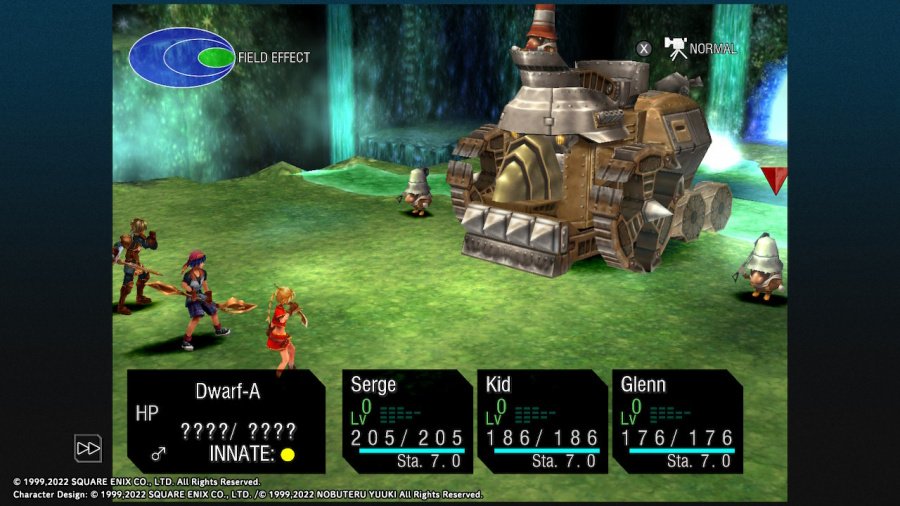 Those turn-based battles take up most of Chrono Cross’s 40 hours. They’re still fully steeped in 1999 with sluggish camera pans, repetitive attack animations, and unnecessary victory screens. It’s a blessing, then, that with the click of a thumbstick you can now avoid enemy encounters entirely, or speed up battles (and exploration) with a press of 'ZR'. That’s not to say these turn-based battles aren’t enjoyable. Chrono Cross features a complex elemental battle system that takes a bit of getting used to but becomes a pleasure to strategize with. Still, our patience for outdated turn-based tropes wore thin quickly enough for us to make liberal use of these mod-con additions.

Not included are any options to alleviate the pain of navigating menus from the last century. Nor do the full-motion video cutscenes receive an update. An animation studio giving Chrono Cross’s narrative the visual flair it deserves would’ve gone far in making this remaster feel more substantial, but while the additions are welcome, it's all a little bare-bones.

Actual widescreen support would have helped, as well. Square Enix included three resolution options: Normal, Full, and Zoomed, all of which feel inadequate. 'Normal' presents the game in a centred 4:3 frame with a border that leaves nearly half of the screen unused, 'Full' stretches out the image to the edges of the screen like a poorly sized desktop wallpaper, and 'Zoomed' skims about a centimetre off the screen from the top and bottom. Pick your own poison – ours was Normal. All settings look better with the Switch undocked, but on the more forgiving lower-resolution screen, most things tend to. In fact, we spent most of our time playing in handheld mode. Like many games, the Switch’s portability becomes one of this remaster’s greatest strengths. 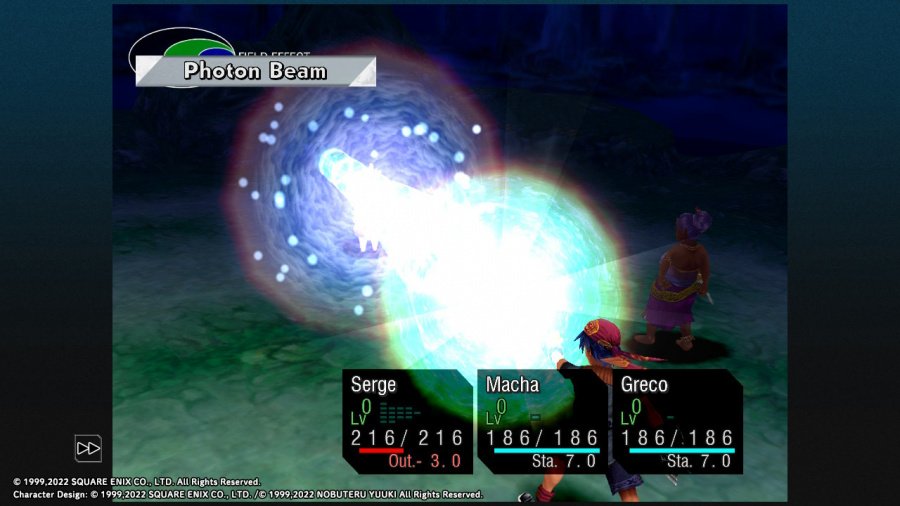 The rest of The Radical Dreamers Edition does receive a visual makeover, though. Unlike remasters like Wonder Boy: The Dragon's Trap and Diablo II: Resurrected where you can swap between the classic look and the new at any time with a push of a button, here you must exit to the menu each time you wish to switch between the classic and new graphical styles, of which a more legible font, new character portraits and models, and the de-pixelated backgrounds are all tied to a single option. If you want the classic font style and character portraits, but prefer the look of the new backgrounds and more defined character models, you’re unable to toggle them individually. Swapping also becomes a headache in a game with fixed save points, nixing one of the joys of playing a remaster: comparing the old to the new on a whim — something that was an unexpected point of delight with Wonder Boy, in particular.

That said, we much preferred the new graphical style anyway. The backgrounds in particular, resembling paintings rather than the pixel mosaics of the original, impressed. The more we played, however, the more we noticed that both styles stuttered as if the Switch had trouble maintaining a steady frame rate. This seemed slightly worse with the newer graphical style and more noticeable with the Switch docked. Smaller areas like the Pirate Ship remained stable, but Termina and other expansive areas chugged along here and there. Battles also suffered from some minor slowdown, especially when first loading or after enemies were defeated – a disappointment to be sure, especially considering the modest improvements made with this remaster. There's a Day One Switch patch scheduled to go live shortly, with another one to follow soon after — we'll update this review with impressions should it improve things. 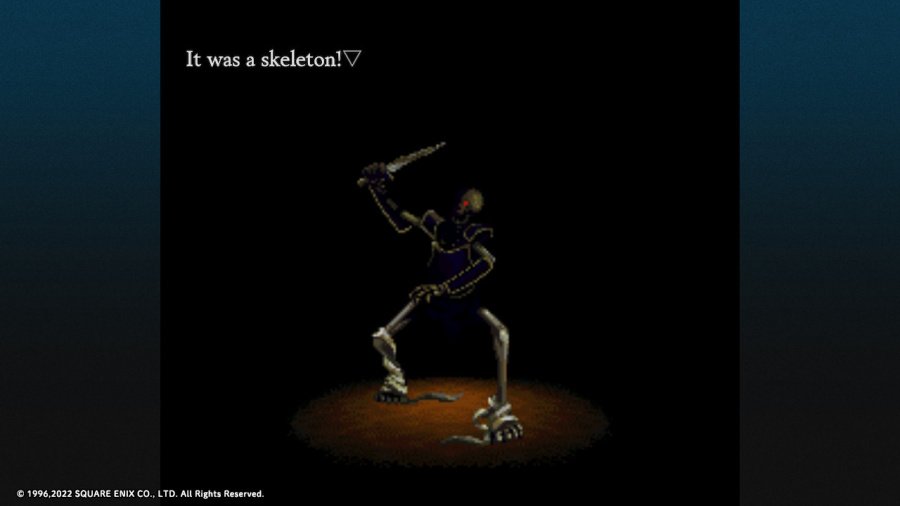 Luckily, Mitsuda’s masterpiece of a soundtrack rises above these nagging issues, remaining essentially untouched outside of minor refinements, even though promotional materials and news articles suggested a full reworking of popular tracks prior to release. This isn’t the case — the menu screen song for Radical Dreamers is a new composition, and Mitsuda rearranged two songs from the Satellaview game and 'Scars of Time" from Chrono Cross (Danish trio "Dreamers' Circus" also contributed four "special arrangements"). Even though the new additions and tweaks are minimal, the classic music is utterly brilliant and you’ll be hard pressed not to stop and listen to track after track whenever you enter a monster-riddled cave or step onto a remote island teeming with tropical vegetation.

It’s a shame that, with the release of Chrono Cross: The Radical Dreamers Edition, we likely won’t see a comprehensive remaster or even a full remake of this underrated gem for a long while, leaving us with a somewhat underwhelming version on Switch that isn’t much beyond a port. Regardless, the portability of the Nintendo's console and the inclusion of Radical Dreamers still makes this the best and most convenient way for fans and newcomers alike to play the 22-year-old classic and its pseudo-prequel. It's a good game and having easy access to it is a boon — just don't go in with more than modest expectations when it comes to the remaster effort.