> Image: Glitch Factory/Ysbryd Games An action RPG with tedious combat and not much to say Red is the color associated with the most heightened .. 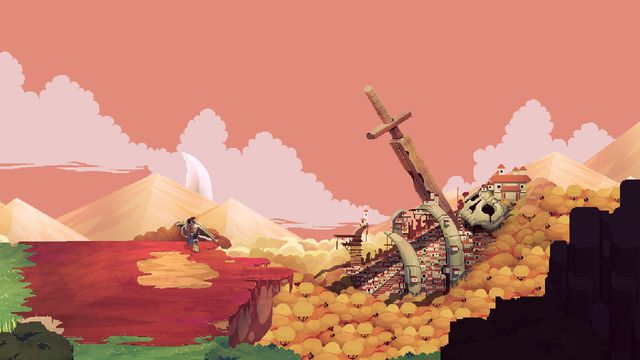 An action RPG with tedious combat and not much to say

Red is the color associated with the most heightened of emotions — passion, violence, pain. It also happens to be the hue No Place for Bravery frequently invokes in its goriest and most pivotal scenes. Thorn, its gruff hero, frequently douses himself in pools of blood and disembodied corpses, his blade smeared with the guts of his foes. But such vignettes are interspersed with sights of the game’s exquisite pixel art environments, its overgrown, emerald forests and dilapidated, rust-colored ruins teeming with vibrant details and immaculate textures. Once every few scenes you’ll even chance upon truly imposing sights, like that of the bone-dry carcass of a colossal dragon, its remains towering over Thorn’s diminutive figure.That said, even breathtaking beauty can’t detract from the tedium of No Place for Bravery, an action RPG that clogs up its wretched tale of revenge and redemption with prolonged bouts of relentless, laborious combat. As a battle-hardened ex-soldier and father named Thorn, a quiet, idyllic moment with your daughter, of hunting in the woods together, was disrupted when a warlock whisked her away with a snap of their fingers. Ten years later, you chanced upon a trace of the same warlock, and thus began your dogged pursuit of her abductor. 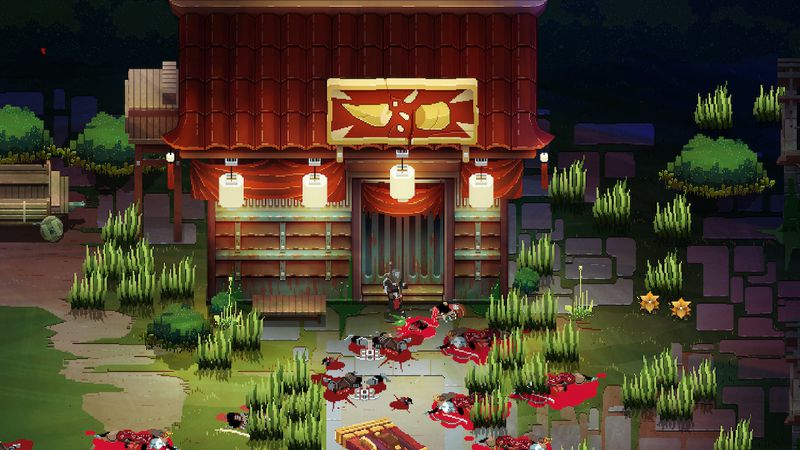 Image: Glitch Factory/Ysbryd GamesThere’s a strand of sincerity in No Place for Bravery that, at times, wavers on gut-wrenching; I can’t imagine it’s easy to move on when it comes to the loss of your own child. But just as it seeks to be taken seriously in its ruminations on fatherhood, No Place for Bravery also revels in the violence and harshness of its battles. For the bulk of your time here, you’ll be hacking and slashing away at waves of demons and men, reducing them to fleshy meat bags amidst the slaughter. You’ll spend hours marinating in the reflexive routine of killing, dodging, guarding, parrying, and executing. Coins can be then wrenched out of their bodies, which can then be used to purchase potions and small weapons. You can also exchange these coins for skill points to unlock more abilities, with which to better pulverize the wretched denizens of this world.It feels as if developer Glitch Factory drew the wrong conclusions from Soulsbornes, an entire genre of games that thrive on challenging combat but still remain technically fairHowever, most fights are nail-bitingly punishing, even bordering on unfair. A stab from No Place for Bravery’s goblin-like fiends, for instance, may seem superficial, but these devils usually arrive in droves and are typically accompanied by a band of crossbow-toting creatures that rain arrows on you, even from beyond the confines of your screen. It feels as if developer Glitch Factory drew the wrong lessons from the oeuvre of Dark Souls creator Hidetaka Miyazaki, an entire genre of games that thrive on challenging combat but still remain technically fair. (No Place for Bravery’s Steam page claims it has “brutal Sekiro-esque 2D combat.”)Enemy projectiles also seem to pass through walls at times, which makes dodging them a sizable challenge. Gaps between floating platforms can be tricky to dash across, as the game demands precision in the way you traverse these environments; one imprecise move will send you falling into the chasms below. What’s more, save points are infrequent and scattered across the map, with your efforts erased if you succumb to your death before you reach the next. They bring back an old-school rigmarole that’s more frustrating than it is inspired. 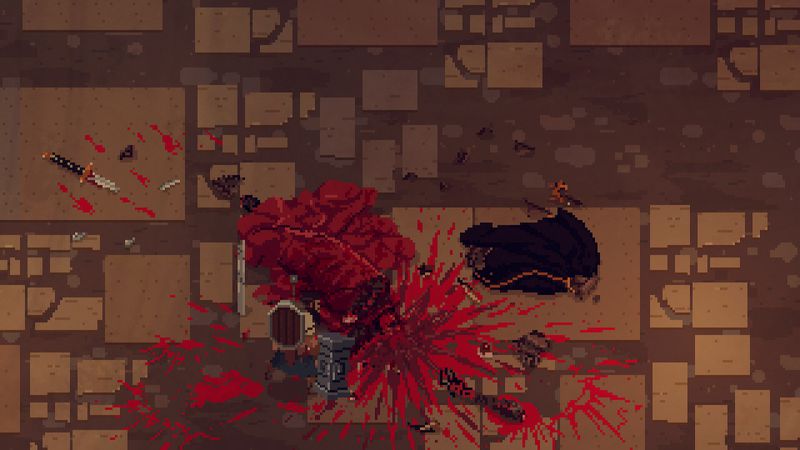 Image: Glitch Factory/Ysbryd GamesFinally, there’s the game’s finicky targeting system, which often locks on to an opponent off screen as you try to snipe them with an arbalest. The camera wobbles between Thorn and his target for a few precious seconds, as if unsure of whose focus it should rebound to. This is a recipe for disaster when there are droves of monsters trudging toward you, bows and stumpy swords in hand, and you can’t even see yourself on screen.What’s most curious about the game, however, is its compulsion for grisly executions. Thorn can perform an elaborate beheading of his foes when they are incapacitated, but if your bloodlust still isn’t sated, the game sometimes gives you a few seconds — a brief window of opportunity — to rip their cadavers asunder with your sword, all as the camera leers uncomfortably close to their pixelated viscera. As far as I know, this move does not award you additional resources; it’s simply a test of twitchy reflexes, as well as a showcase of Thorn’s appetite for brutality.That’s not to say that I can’t see a point to all this violence. There’s definitely a statement, embedded somewhere within these ceaseless, blood-soaked battles, about the stark contrast between Thorn’s instincts as a badass father figure, and the sense that he actually draws some twisted pleasure from butchering his foes into a pulpy mash. The internal tug of war he experiences between wanting to rescue his kid, but also a great deal of schadenfreude from the deaths of the foes he slaughters, is palpable. But this statement gets hollower the longer the game drags on, given how dreary, frustrating, and drawn-out these fights are. Concluding a streak of challenging skirmishes brings only empty relief, rather than a sense of hard-earned achievement. Characters are barely fleshed out, with villagers and soldiers alike rehashing a recycled checklist of dialogue when you converse with them. And when you eventually meet the warlock, they’re somehow ambiguously but enormously distressed, only muttering variations of “No, it’s too soon!” after randomly materializing right in front of you. Such moments (and there are more than just a couple of them) make very little narrative sense. 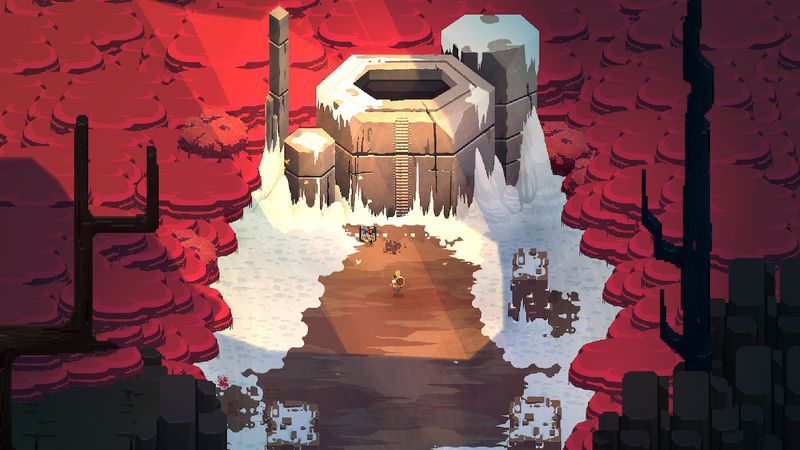 Image: Glitch Factory/Ysbryd GamesPerhaps the most glaringly confusing choice is the frequent suggestion to retire from your murder sprees. At several of the game’s climatic turning points, No Place for Bravery also offers you the option — several times — to simply give up your quest for vengeance and return to a humdrum life as a tavern owner, which will abruptly conclude the game. It takes until midway through No Place for Bravery for the tale to take a more interesting turn, weaving a much-needed change of pace in its scenes by hinting that Thorn isn’t all that he seems — that is, if you even made it that far in the first place.What surprised me the most about No Place for Bravery is its desire to rise above its crass displays of savagery, despite its fixation on its own violence. Glitch Factory seems as though it’s reaching for something loftier than violence for violence’s sake, crafting a game that’s more than just crashing skulls with a gigantic hammer or curb-stomping a downed foe as he pukes his lungs out. This is evident from the stretches of sepia-toned monologues and long conversations Thorn has about his decision to embark on this expedition. But in the end, all there is to remember about No Place for Bravery is the red from all his murderous encounters — the bloodletting Thorn has committed from brutalizing his foes, the insurmountable pain of his cheap, repetitive deaths, and the immense frustration of never seeing the game reach its fullest potential. No Place for Bravery will be released on Sept. 22 on Windows PC and Nintendo Switch. The game was reviewed on PC using a pre-release download code provided by Ysbryd Games. Vox Media has affiliate partnerships. These do not influence editorial content, though Vox Media may earn commissions for products purchased via affiliate links. You can find additional information about Polygon’s ethics policy here
Did you miss our previous article...
https://gamingnewsclub.com/reviews/review-oneshot-world-machine-edition-a-brilliant-and-bittersweet-indie-darling