> Image: Odyssey Interactive Competitive without being crummy Omega Strikers is a cleverly designed game; at first, I was drawn in by the..

Competitive without being crummy

Omega Strikers is a cleverly designed game; at first, I was drawn in by the colorful characters and simple premise. Developer Odyssey Interactive, made up of former leads from Riot Games, has been brave enough to ask: What if League of Legends characters, with their unique abilities and strong personalities, sat down to play a game of three-on-three soccer? Polygon was invited to a preview test of Omega Strikers, and the answer is that it’s fast, fun, and dynamic; Omega Strikers is the sort of game where you have an itch to play just one quick round to kill a few minutes, and then uh-oh Spaghettios, 45 minutes have passed.A round of the game kicks off with a quick draft where each team picks their strikers. There’s a small but eclectic cast of characters, with more on the way, and players can choose from 10 neat characters. The roster is a breath of fresh air; there’s a shy witch surrounded by faerie familiars, a goo girl in space apparel, a giant friendly bear, and a shirtless guy who shoots fire out of his hands. 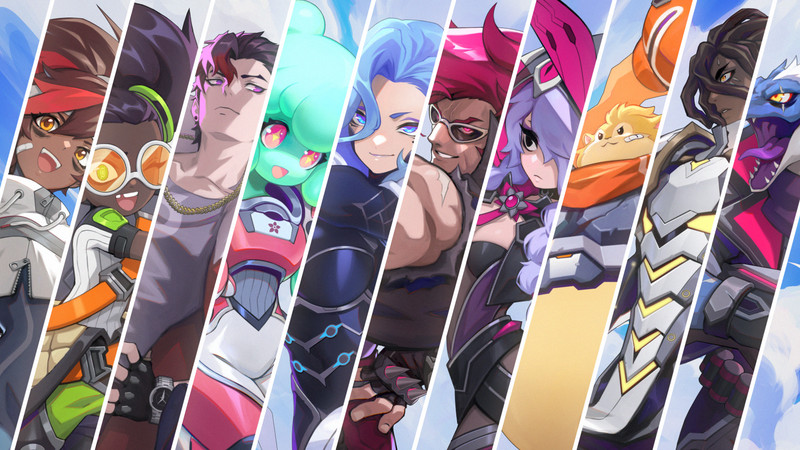 Image: Odyssey Interactive“We wanted to create something that had broad appeal and accessibility. We didn’t want to go down a dark, gritty fantasy route. We wanted to create, like, a — we call it a hopeful and energetic view of the future. A mix of Splatoon and Overwatch kind of put together,” says Dax Andrus, co-founder of Odyssey Interactive. “Your lows in the game are blunted and your highs get accentuated by this fun, energetic style that lifts you up as you play it.”Once you’ve locked in your striker, you go into a match that lasts just a few minutes. This is a good pace because it’s difficult to ever get too mad at Omega Strikers; there’s just not enough time investment per match. The losses roll off like water off a duck’s back. Instead, I’d find myself admiring an opponent’s plays and wondering if I could replicate them myself. At the same time, the high moments still sing; the kinetic effects, strong visual effects, and clear action just feel good. Wins feel great, as the camera zooms in on your striker, the game plays a little MVP outro, and there’s an appropriate amount of fanfare.“It’s a very character-driven game where everyone plays a very different way, not just by the design of their base kit, but augmented by training options and [customizing] the way you engage with PvPing with other players or focusing on scoring,” says Richard Henkel, co-founder and president of Odyssey, in the call with Polygon. “There’s a lot of variants, and what those high moments can look like differs — some players are super aggro, other people are sharpshooters or looking to take all the ankle-breaking goals.” 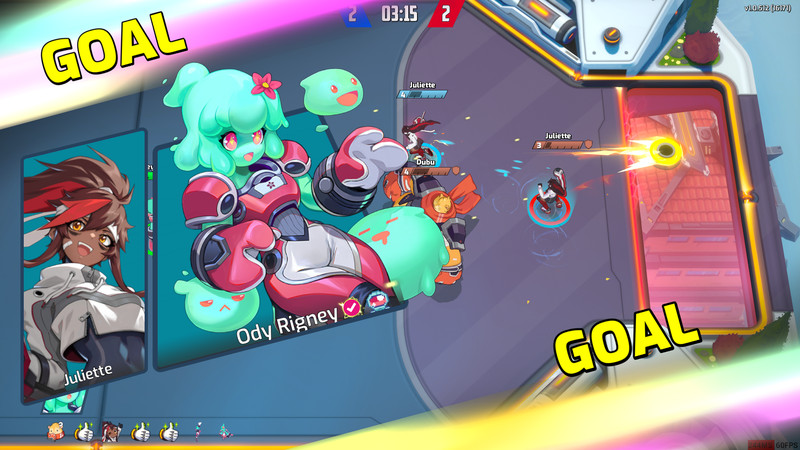 Image: Odyssey InteracitveEach match starts with the players arranged on the map in formations of three. Once the game begins, the goal starts as a very narrow gap. Over time, it widens, creating an increasing sense of pressure. The characters each have unique abilities; for instance, I played a witch who could create zones to speed up her allies and hurl tornadoes to stun her foes.All of the rough edges that complicate a match of Overwatch or League of Legends have been sanded away. There’s no mastery traps, no text chat (a very deliberate decision, says Henkel), and automated systems to detect griefing. The only way to really effectively grief someone, I discovered, is to run up to them while the camera focuses on them for a post-goal celebration, and spam a silly emote.Omega Strikers is built with a small, strong core, but it’s clear that the game has room to expand. Odyssey intends to work with creators, including a 1% revenue share in the first season with a creator whose community wins the most games. The developer intends to vet creators to maintain the program; the idea is to keep the game acceptable for a family game night or college club. There’s also room for collegiate esports, comics, and maybe even other games.The sky’s the limit, and while Omega Strikers is currently small and humble, Odyssey hopes that the moment-to-moment fun will build launch momentum and lead to a strong grassroots community. Omega Strikers launches Friday in beta on Steam; it will roll out to other platforms in successive updates.
omegastrikersyoufeelgamefeelbaddoesnmakeyou